Beggars Banquet opens with the words ‘Please allow me to introduce myself, I’m a man of wealth and taste,’ – This line, from Mick Jagger’s enigmatic Sympathy for the Devil, is one of my favourite lyrics ever, up there with ‘Living is easy with eyes closed, misunderstanding all you see’ (Beatles) / ‘I gave her my heart but she wanted my soul’ (Dylan) /  ‘Castles made of sand, fall into the sea, eventually’ (Hendrix) / ‘I’ll feed you strawberries and cream, and your friends will all go green, for my lasagne’ (Oasis) – ok, maybe not the last one.

With inspiration taken from Mikhail Bulgakov’s The Master and the Margarita (“‘Please excuse me,’ he said, speaking correctly, but with a foreign accent, ‘for presuming to speak to you without an introduction'”) this deft line of subtelty and intrigue, from one of, if not my all time favourite Stones tracks braces us for an anthemic, almost operatic masterpiece, bound by a hypnotic samba rhythm. A wild, mad and erudite incantation that jutted the Rolling Stones towards the dark side of rock n roll, and miles away from the clean cut Beatlemania that had engulfed and transformed England throughout the 60’s. Beggars Banquet came out 10 days after the Beatles’ White Album – which too attracted fervent analysis of its darker elements – Charles Manson was convinced that Helter Skelter was a coded prophecy of an apocalyptic vision, wherein the world’s white population would exterminate each other, leaving Manson to rule over the remaining black race, as they were supposedly unable to rule America. Popular music in England throughout the 60’s had little obvious darkness, especially when the Beatles were concerned. The allure of Lucifer was apparent in delta blues, but hadn’t migrated as such to England, yet the blues influences that shaped the Stones are apparent in Sympathy. Robert Johnson was a massive influence on the Stones, his technical mastery in particular shocked Richards when Brian Jones first introduced him to the blues legend – “I was hearing two guitars, and it took a long time to actually realise he was doing it all by himself.” The legend surrounding Johnson of course is that he took his guitar, or was instructed to rather, to a crossroads near the Dockery Plantation in Mississppi at midnight, where he met a large black man – supposedly the devil – who took the guitar from him, tuned it, played him a few songs and handed it back. This deal with the devil gave Johnson a mastery of the blues, in exchange for his soul.

Jagger doesn’t introduce himself as the devil himself however, despite the giveaway in the title. He teases us, by describing himself as a ‘man of wealth and taste,’ who has been around ‘for many a long long year,’ who ‘stole a man’s soul’ – Johnson at the crossroads – ‘and faith.’ The narrator goes on to reveal that he was there when Christ had his ‘moment of doubt and pain’ and moreover, he ‘made damn sure that Pilate, washed his hands and sealed his fate,’ before introducing the familiar, teasing refrain – ‘Pleased to meet you, hope you guessed my name,’ – coaxing, and urging us to think the unthinkable, that it is the devil himself narrating these events.

The narrator goes on to mention the Russian Revolution – ‘Stuck in St. Petersberg, when I saw it was a time for a change,’ and alludes to ‘Anastasia, who screamed in vain,’ the Russian princess who was murdered along with the rest of her family, yet it was believed throughout most of the 20th century, and certainly when Sympathy was written, that she was the only surviver of the incident, and became a legend in her own right. Our narrator then moves onto World War II (‘the Blitzkrieg raged,’) the holocaust (‘and the bodies stank,’) the hundred years war (‘your kings and queens, fought for ten decades,’) and the Kennedy assassinations. The allusion to the ‘Troubadours’ are the hippies who traveled the Hippie Trail. Many on them were killed and ripped off by drug peddlers in Afghanistan and Pakistan, ‘before they reached Bombay’. The traps were set here by the devil himself, it seems.

Jagger manages to flex his historical knowledge, quite astonishingly, into just 6 minutes and 19 seconds – “I knew it was a good song. You just have this feeling. It had its poetic beginning, and then it had historic references and then philosophical jottings and so on. It’s all very well to write that in verse, but to make it into a pop song is something different. Especially in England – you’re skewered on the altar of pop culture if you become pretentious.” Jagger (1995)

Jean Luc Godard’s film One Plus One is an amazing insight into the growth and development of a song, and the meticulous nature of the Stones as songwriters. Filmed over five days in June, 1968, it shows how the song grows and grows, takes on different versions, and eventually gets to the version we know today. The soundtrack is one song, essentially, for 1 hour and 35 minutes. Yet you see Sympathy begin as a folk song, with Richards messing around with slide fills and open tuning picking over the top. Then the song goes down a horrible direction with Charlie Watts providing a backbeat, and Nicky Hopkins playing the chords on an organ. Hopkins was then put on piano for the version we now know. It’s hard to imagine Sympathy without the samba beat, which gives it a tribal, uplifting, party atmosphere. Jagger notes that ‘It has a very hypnotic groove, a samba, which has a tremendous hypnotic power, rather like good dance music. It doesn’t speed up or down. It keeps this constant groove. Plus, the actual samba rhythm is a great one to sing on, but it’s also got some other suggestions in it, an undercurrent of being primitive – because it is a primitive African, South American, Afro-whatever-you-call-that rhythm. So to white people, it has a very sinister thing about it. But forgetting the cultural colors, it is a very good vehicle for producing a powerful piece. It becomes less pretentious because it’s a very unpretentious groove. If it had been done as a ballad, it wouldn’t have been as good.’

The ‘Woo-Woos’ add a faux spookiness to the track, reinforcing the dark subject matter. In Godard’s One Plus One, we can see how Jagger lays down the master vocal, with a board to the left of him, and the other side the woo-wooers – Bill Wyman, Brian Jones, Keith Richards, Charlie Watts, their producer Jimmy Miller, and to add a female touch, Anita Pallenberg and Marianne Faithfull. Jean Luc Godard’s film, whilst slightly tiring at times given the incessant repetition of the extended shots of the recording attempts of Sympathy, has some dark asides – A girl who spraypaints random walls and windows – shots of African-American leftist group the Black Panthers sitting in a junkyard, tossing rifles to each other as if getting ready for battle, whilst reading passages from revolutionary texts, including Amiri Baraka – a repeated voiceover, narrating Marxist messages. 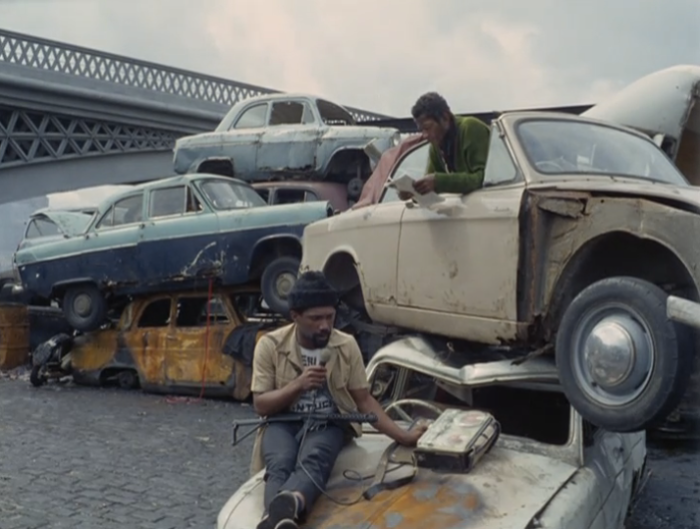 You certainly get a sense of the devil in these asides, but also a sense of revolution, confusion, foreboding – all of which is found in Sympathy. Keith Richards summed up the song and its apparent meaning, in 2002 – ‘Sympathy is quite an uplifting song. It’s just a matter of looking the Devil in the face. He’s there all the time. I’ve had very close contact with Lucifer – I’ve met him several times. Evil – people tend to bury it and hope it sorts itself out and doesn’t rear its ugly head. Sympathy for the Devil is just as appropriate now, with 9/11. There it is again, big time. When that song was written, it was a time of turmoil. It was the first sort of international chaos since World War II. And confusion is not the ally of peace and love. You want to think the world is perfect. Everybody gets sucked into that. And as America has found out to its dismay, you can’t hide. You might as well accept the fact that evil is there and deal with it any way you can. Sympathy for the Devil is a song that says, Don’t forget him. If you confront him, then he’s out of a job.’

The first track on Beggars Banquet, a year before Altamont, began the transition away from the Peace and Love era of the sixties, and remains one the Rolling Stones most anthemic and critically acclaimed tracks to date, and lyrically, in my eyes at least, Jagger’s finest work of art.