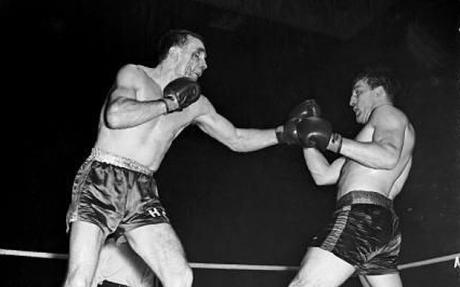 Thankfully, by the time our nations papers had gone to print, news of Bin Laden’s death on Sunday evening hadn’t yet trickled through. This meant that instead of his mug being plastered all over the front pages, a far more reputable and honest gentleman by the name of Sir Henry Cooper was given sufficient press. In a weekend of news overload – Royal Wedding hysteria, Libyan bombings, Premier League title race intrigue – the capturing and killing of the world’s most wanted man would have surely sidelined the news of Henry Cooper’s death to page 5 of most papers.

Let’s not dwell though. Sir Henry Cooper’s obituary in The Times read that he was regarded as ‘probably the the most popular British boxer of his time.’ I’d argue of all time. In a world of multi millionaire footballers, your Ashley Coles and Wayne Rooneys, it’s hardly surprising that such an earnest and humble character such as Cooper could be popular. Yet in the boxing world he was revered for the same thing, his demeanor. Most sportsmen are judged, critiqued and celebrated for their achievements, and seeing as Cooper never won a word title, he seems the perennial underachiever in comparison to the ‘GOAT’ Muhammed Ali. Sure, he won 40 bouts, 27 by the way of knockout, but never a world title – but did that ever really matter?

The image above shows the moment he is most famous for, boxing wise, when he knocked down Ali (then Cassius Clay) in their famous 1963 fight. Whilst this was Cassius Clay in his early years, before the ‘Greatest Of All Time’ plaudits, he was still the arrogant, cocksure showman he was both loved and hated for. He directed a tirade of insults toward Cooper, ‘a tramp, a bum, a cripple.’ Yet it was in the fourth round, when this American show off full of Hollywood razzmatazz looked like he was beaten as Cooper knocked him down with a fierce right hander. What followed stands in folklore as a great injustice against the British. Clay was illegally revived by smelling salts, and as legend has it, a tear was made on his glove in an attempt to delay the beginning of the 5th round by a few minutes. It worked, Clay went on to win the match on points – the rest is history.

I was into boxing a little bit in my teenage years, when I was about 16 I think. I went on a family holiday to LA and my literature of choice at the time was sporting biographies, in particular boxing ones. I was reading Henry Cooper’s the morning that, in our hotel lobby, we unwittingly spotted Mike Tyson on his mobile. After a bit of encouragement from my Mum, I went over and laid it on thick how big a fan I was. To be fair, it was true, he was a legend from my youth. Staying up late to watch him fight Frank Bruno was one of my standout childhood memories. I suddenly panicked, when only finding a pen and no paper, but instead I offered the front blank page of my Henry Cooper autobiography for him to scribble his signature on. Tyson spotted the book’s subject, and he revealed great admiration for Cooper, a ‘true fighter,’ I think were his words. He then remarked ‘I was so sad when he died’. I was a little bit confused, sure, mainly because he was well and truly alive – but this is Mike Tyson, who am I to argue?

There is something very filmic about Boxing – no surprise that there have been so many boxing films, and so many good ones at that. Rocky, Raging Bull, more recently The Fighter and Million Dollar Baby to name a few. The lone struggle with the regime and preparation, the giant mental obstacle to overcome, not only through this preparation but through the opponent himself. Then then denouement complete with victory, conquest, blood, pride, extollment – A breadth of superlatives, fitting for Hollywood. Yet it was Cooper’s very un-Hollywood character that awarded him his knightood, his popularity and place in British boxing’s heart.

He certainly wasn’t Muhammed Ali, he was far too refined for all that success.

One thought on “Sir ‘Erny”